You may have heard the saying that "History doesn't repeat itself, but it often rhymes". From triremes to the mighty battleships of recent times, could the aircraft carrier become the next superpower to be resigned to become a thing for the history books?

Requiring a massive expenditure to build and maintain, and with newer cheaper, and with faster-to-build technologies like anti-ship missiles and drones emerging, does it make sense to keep them afloat? Let's take a look at what the future of aircraft carriers might be.

RELATED: 9 OF THE BIGGEST SHIPS EVER BUILT

Just over 100 hundred years ago, the battleship formed the core of many navies around the world. These massive beasts of war dominated the seas for many years and seemed near indestructible, at least to smaller classes of ships.

Of course, such myths were soon dispelled with major battleship engagements like the Battle of Jutland, where the British fleet lost several battleships and battlecruisers — one of the Royal Navy's worst losses in an engagement. But the day would come when these enormous juggernauts would meet their match from a new form of military technology — aircraft.

In a tragic event, the Japanese attack on Pearl Harbor saw several U.S. battleships lost to swarms of carrier-based dive bombers and torpedo planes, putting an end to the notion of the superiority of the battleship.

But the USS Arizona and USS Oklahoma were not the first battleships in history to be sunk by airborne attackers. Almost 20 years earlier, in 1921, the captured battleship, the German Ostfriesland, was sunk during air trials in a demonstration of the potential benefit of airborne attacks on a battleship.

However, as this was a test, and not real combat, many military observers were not impressed. The test's originator, Gen. Billy Mitchell, had been advocating for a change in thinking for years, but his warnings appear to have fallen on dead ears.

It would prove to be a costly decision, for the U.S. at least. Two observers at the air trials that day were Japanese.

The aircraft carrier would come into its own during the tumultuous events of the Battle of Midway. They also proved their worth through at least five major sea battles between 1942 and 1944. The future was set for the aircraft carrier to our modern day.

How long does an aircraft carrier take to build?

The Nimitz-class aircraft carriers took, on average, around 6 years to build. Britain's latest carrier, HMS Queen Elizabeth was commissioned in 2007, and sea trials began in 2017.

Older examples include the French Charles De Gaulle (R91), which was commissioned in 1986 and first launched in 1994 — around 3 years. But she didn't complete her maiden voyage until 2001.

Some larger ones, like the more recently-built supercarrier USS Gerald R Ford, took around 8 years to complete.

Despite proving their worth for many decades now, many top military officials are beginning to question their relevance today. According to The Diplomat, a new study is currently critically analyzing the future of the carrier as the centerpiece of the United States Navy.

The study may even see orders for the brand new Ford-class carriers significantly reduced. The study is also looking into the future of what carriers actually carry into battle.

"The long-term challenges facing our nation and the world demand clear-eyed assessments and hard choices. Because we have four new Ford carriers under contract, we have some time to reimagine what comes next.

Any assessment we do must consider cost, survivability, and the critical national requirement to sustain an industrial base that can produce the ships we need — ships that will contribute to a superior, integrated naval force for the 2030s and far beyond."

The study will look into various combinations of manned and unmanned aircraft, as well as the cost-benefit of nuclear and more conventionally power systems. Concerns around the massive investment needed to build them and rising threats to carriers from long-range, accurate ballistic missiles, air, and seaborne drones, and other low-cost threats, could put the future viability of carriers in serious doubt.

For example, China has purportedly developed a long-range missile that is highly maneuverable and accurate enough to hit large ships at sea. Called the 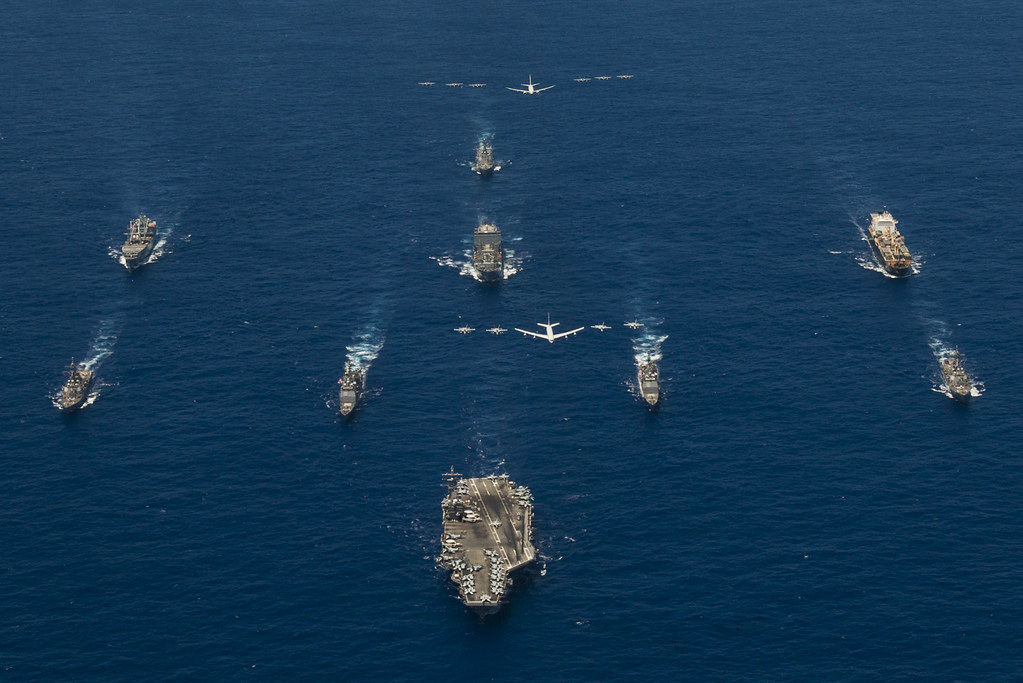 , it can apparently travel over 930 mph (1,500 km/h), putting carriers in very real danger if they prove accurate.

Built on a large scale, salvos of hundreds of these missiles would make naval commanders think twice about putting their carriers anywhere near China's coastline.

Even if they do, carriers will probably need to operate at least 620 miles (1,000 km) from the shore — seriously limiting their effectiveness given the combat range of the planes they carry.

However, carriers are not all about offense. They also provide very important support. For this reason, they are unlikely to become completely obsolete.

One area where carriers might remain relevant is by changing the makeup of the aircraft they carry. Unmanned aircraft might be the saving grace of the aircraft carrier. They are cheaper to build and, since they don't have the added weight of carrying and keeping a human pilot alive, they can stay in the air for extended periods of time.

Such aircrafts are able to be employed in riskier, longer-range operations, allowing their host carriers to stay farther out to sea and out of harm's way. One notable example currently under development is the X-47B.

An unmanned combat aerial vehicle (UCAV), is a fighter-sized craft able to land, and takeoff, from an aircraft carrier. It can even be refueled mid-flight. Crafts like this might be on the cards for future aircraft carrier fighter wings.

Could drones spell the end of aircraft carriers?

In short, yes and no. As we have already seen, drones could not only threaten but also prove to be the saving grace of aircraft carriers as a viable weapon of war as drones become more numerous and advanced.

But, aircraft carriers are not the only ship class that may get an overhaul using drones. CNNreported back in 2016 about a new DARPA project hoping to add drones to many ships to provide air support operations from around the world.

Dubbed the "launch and recovery" system, if successful, we may see smaller ships armed with drones replacing the role of aircraft carriers as forward-deployed ships.

The contract was awarded to Northrop Grumman, which forms part of the larger DARPA Tactically Exploited Reconnaissance Node program. Such systems will combine vertical takeoff and landing drones that can fly for long distances equivalent in range, or longer, to conventional fixed-wing planes.

What will replace aircraft carriers?

If we were to assume that the era of the aircraft carrier is coming to end, what, if anything, could be used to replace them? Does the role they provide even need to be replaced? It is unlikely that the air support capabilities that aircraft carriers provide will ever be not needed. After all, one of the biggest threats to surface fleets is from the air.

Fleets will always need to command airspace, or they risk being preyed upon from airborne threats, such as aircraft and missiles. As we have seen, one solution may be to retire large, big-ticket items like carriers, and provide individual, smaller ships with their own compliment of airborne assets.

But there might be another solution, using a bit of lateral thinking...

Using drones at sea might get a new angle with the idea of submersible sub-carriers. Such vessels could be nuclear powered and remain submerged for long periods of time — just like a conventional nuclear submarine.

Drones could be deployed by either surfacing and launching from short flight decks, or by using launch tubes. Such a capability would offer this new type of "carrier" a much better chance of survival, while also potentially gaining them the element of surprise.

The brainchild of H. I. Sutton (author of the Covert Shores website), these vessels would require minimal personnel to operate. Deck robots and other autonomous systems could be used to do most of the heavy loading.

Sutton envisages such a vessel using ballast tanks to raise or lower itself in relation to sea level. These crafts could also be semi-submersible, lowering to surface level when not in combat. Or, versions of this kind of aircraft carrier could also be fully submersible, as with traditional subs.

Several units of the U.S. own submarine fleet, namely the Ohio-class subs, have been modified to act as Tomahawk land-attack cruise missile platforms too.

What is to stop a similar system being used to deploy attack drones? In fact, these subs have already been used to launch Sea Robin drones at sea.

But the concept of submersible aircraft is nothing new either. In fact, during WW2 the Imperial Japanese Navy was developing just that.

Called the 1-400-class, some were even built. Although, they never saw action.

Another potential replacement could be airborne drone motherships. Either lighter than air or similar to more conventional aircraft, these platforms could house, deploy, recover, rearm, refuel and repair drones (or aircraft) from the air.

Interestingly, this concept is not a new one, as we detailed in a previous article on the subject.

So, could the future of the aircraft carrier be in jeopardy?

Well, to summarize, the bottom line is this: Aircraft carriers have been around for over a century now and are still very formidable war machines indeed. This is for one main reason — aircraft carriers are not just about the ship itself.

Their basic concept has not changed over that time as they have adapted to carry, launch, recover, etc first bi-planes and now some of the most advanced aircraft ever conceived.

Why couldn't they just replace those with many, many, more drones? They must adapt and survive or they will go the way of the battleship.